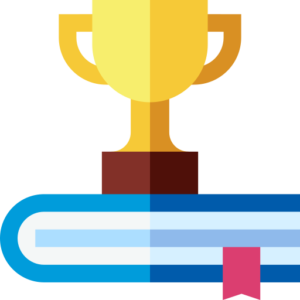 It’s easy to feel lost in the flood of so many new children’s books available. Each month, our review panel reads scores of new books and we highlight five of our recently published favourites.

Check out our Review Panel’s top books for you to read in January 2023. 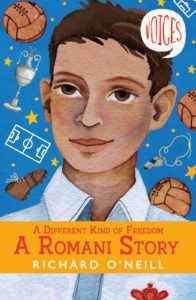 A Different Kind of Freedom: A Romani Story

A thoroughly enjoyable read set in 19th-century Sheffield. This book tells the story of Lijah –  a Romani boy living in a Traveller camp. Lijah enjoys collecting scrap with his dad and brother, travelling on the cart and listening to his dad’s stories by the fire.

One day, visitors from the Sheffield census come around and decree that Lijah has to start going to school. At first, he struggles with reading and writing and faces prejudice when some of the other children call him ‘gypsy’ or ‘tramp’, he soon discovers a fascination for a new game called football and finds a way to join in with the other boys.

Back home, Lijah’s dad is not happy about Lijah playing football, calling it a dinlo (foolish) game. His dad instructs Lijah not to play, but does accept a gift of a football for Lijah in order to make a good connection with a local businessman called Jack Davis. Over time, Jack bonds with Lijah over his passion for football and tells him about a famous Romani player called Rab Howell. Can Lijah follow in his new hero’s footsteps while still staying true to his roots and keeping peace with his dad?

Written by a Romani author, this quick and compelling read deals with big themes of heritage, family, changing times and prejudice in sport. As the author explains in his note to preface the story, “If you come from a marginalised community, you often have a number of challenges to overcome. Or to use a football analogy: you’re starting the game a couple of goals down.”   Near the end of the story, Lijah comes to the realisation that his upbringing has become an asset and instrumental to his talent, despite the prejudice he will no doubt encounter.

The story provides an original new angle into the stream of football storybooks available and it was interesting to consider the time when professional football was first becoming popular and the legacy of Sheffield in football history, as well as to learn about Rab Howell. Many young readers will relate to the difficulty Lijah encounters balancing cultural traditions with modern life, as well as the tensions between family expectations and following one’s own passions. 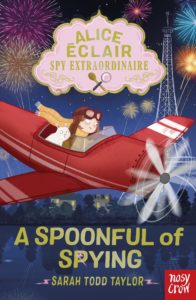 A Spoonful of Spying (Alice Eclair)

Alice Eclair, Spy Extraordinaire will whisk you away on a fabulous adventure, full of daring action and delicious cakes! Baker by day, spy by night – Alice Eclair leads an exciting double life!

Alice Eclair, Spy Extraordinaire is a heroine for modern times and a brilliant role model for young girls. She is strong-willed, determined and resourceful. Yet, she is fallible at the same time. This is part of what makes her so endearing.

Alice is just finding her feet in the spy game and is working hard to gain the respect of her fellow spies and prove herself. And somehow, she does all of this without her mum finding out. Very clever indeed!

Sarah Todd Taylor is a splendid writer with a knack for creating stupendous characters that leave a strong impression on the reader. This is Alice’s second adventure as a spy and we can see how she has developed from the first book. All of the main characters are dynamic, each contributing in their own way to the story. This is an easy-to-read series laced with a good potential for collectability and a super introduction to the detective fiction genre, laced with excitement and enough clues to keep you guessing. I do hope that there will be many more adventures for Alice! 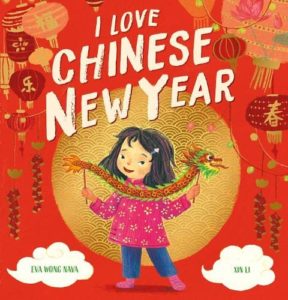 The night before the celebrations, Mai-Anne explains that the Lunar New Year is about to arrive and that her family enjoys a special set of traditions. Mai-Anne helps to clean and decorate the house and is excited when her grandmother (Nai Nai) arrives in time for the most important dinner of the year – fish for good luck, noodles for a long life, dumplings for blessings and nian gao for success. After dinner, Mai-Anne and Nai Nai settle down together and Nai Nai recounts the important story of the Great Race. Along with Mai-Anne, the reader learns about the story of the twelve animals who race to cross the river. Then Mai-Anne enjoys a special family Dragon Dance, eats sweet tangerines and wears a special red outfit for luck.

This is a lovely picture book to read at Chinese New Year but also all year round too as a book that celebrates family moments, bonds with grandparents and the joy of special traditions. The illustrations and text are both warm and celebratory in tone. It also features a non-fiction section on the final pages with more information about Chinese New Year and the dragon dance. The Ministry of Unladylike Activity

The Ministry of Unladylike Activity’ is the first in a new follow-on series from Robin Stevens’ superb ‘Murder Most Unladylike’ series, and, from the evidence of this first adventure, it is going to give us a thrilling, page-turning and well-loved a ride as the original. While the protagonists from Murder Most Unladylike, Daisy and Hazel, make some lovely cameo appearances, we have moved on in time to 1940 and Hazel’s youngest sister, May Wong, has come to the fore – and is the focus of just as much mystery, mischievousness and mayhem.

At the start of our story, May has been packed off to Deepdean School from Hong Kong due to the war, but this young firebrand won’t settle for safety – she wants to become a spy, fight the Nazis and find a bit of excitement. Pretty soon she has absconded from school, made a new friend, Eric, masqueraded as an evacuee, and been sent to Elysium Hall, from where someone is sending information to Berlin….

Soon the scene is set for a classic country house mystery, with a vicious murder and a cast of possible suspects. Sidney Foley, scion of the Verey family, is dead and not everyone seems as upset as they should be. Too many people are lying, everyone seems to have a motive, and the children seem to be uncovering more mysteries than they solve. Who has been living in the old abandoned cottage? Why does the maid have a bundle of stolen trinkets?  Is dead Uncle Leonard’s ghost really haunting the house? What has happened to Uncle Hugh’s missing ‘important papers’?  And, of course, who is the spy?!

Robin Stevens is possibly the only children’s author working today who can keep all of these plates spinning so expertly with the lightest of touches.

The rollicking adventure plot, the large cast and the multiple storylines and red herrings never overshadow each other. There is a very satisfying denouement, a perfect ‘ah ha!’ moment, with just the right amount of clues along the way, and all of the secondary plot lines are also tied up satisfyingly.

There is also a huge amount of historical information linked to World War 2.  Some of this is obvious (evacuees, rationing etc.) but any teachers using the book in class should start by reading the excellent ‘Author’s Note’ at the end. This explains many important but potentially little-known facts that are mentioned in the story (limits on refugee numbers, British internment of German/Austrian men and boys, Irish neutrality etc.)

In summary, The Ministry of Unladylike Activity is about as perfect a page-turner as a reader could ever hope for. 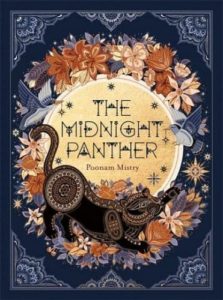 Deep in the forest lives a little black panther.  Surrounded by wonder, his life should be idyllic … except that he’s different from the other cats.  They all seem so confident: Tiger has bold, fearless stripes, Lion’s mane shines like the sun and Leopard’s spots are dazzling.  When their taunts overwhelm him, Panther sets off on a quest to improve himself.  At first, he is intent on imitation, until, at last, the moon helps him to discover his own special beauty.

The reader has been able to see this beauty all along, through the intricately detailed illustrations which are influenced by traditional Indian art and textiles.  There’s no need for lengthy descriptions because these fascinating pictures illuminate the scene but the vivid word choices sparkle nevertheless.  This would make a great read-aloud book.  The ending, with its message of courage and self-acceptance, is uplifting and reassuring.

While the rhythm of the fable may be familiar from folklore, the manner of the telling is original and richly pleasurable.  It would fit perfectly into a unit on traditional tales – a literally fabulous model for a journey tale to use in Key Stage 1 or early Key Stage 2.  I can see the book inspiring some wonderful art projects exploring lines, patterns and colour (each spread uses a particular palette), either using different methods of printing or computer programmes.  In maths, there would be possibilities for investigating symmetry and reflection.

With lyrically expressive language, gorgeous illustrations and a simple but empowering message, this is a magical book – one of my favourites of 2022.

Many thanks to our review panel members Carol Carter, Louisa Farrow and Tami Wylie for reviewing this month’s selection. 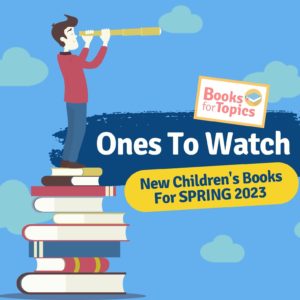 Ones to Watch – New Children’s Books for Spring 2023 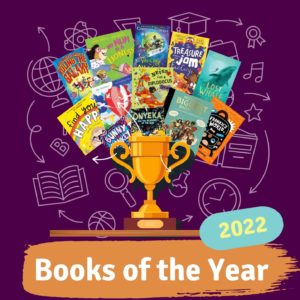 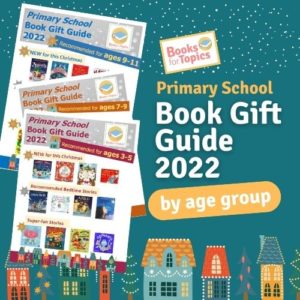 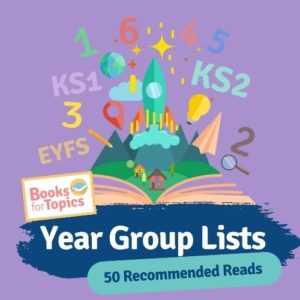 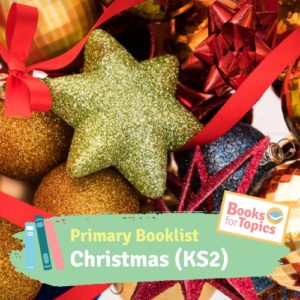