Add to Favourites (0)
To login click here
Today we are pleased to welcome to our blog author Isaac Hamilton-McKenzie, who is one of the writers with the Storymix team. Isaac tells us more about the latest book in the Future Hero series and about his experience of working on the project.

Meet the author behind the Future Hero series

Future Hero 2: Mission to Shadow Sea is out now. Written by Remi Blackwood, which is a pen name of the series creator, Jasmine Richards, founder of inclusive children’s fiction studio Storymix and a team of young and upcoming writers, including Chiemeka Nicely and Isaac Hamilton-Mckenzie.

Jasmine and the Storymix team are passionate about giving every kid the opportunity to be the hero of the story. Future Hero 2: Mission to Shadow Sea is the second book in the major afro-futuristic fantasy series for readers aged 7 and upwards. This fast-paced underwater adventure story is perfect for fans of Black Panther and Beast Quest and is inspired by the mythology of Africa and its diaspora. Jarell, the hero of the story, is an ordinary boy from our world. He is chosen to save the realm of his ancestors from an evil sorcerer.

We meet Isaac Hamilton-McKenzie, one of the writers and find out why this book should absolutely be added to your reading list!

How did you first get involved with Storymix?

Well, it was quite a funny route. A family member of mine went to a creative event called Black Girl Fest and got talking to Jasmine. My cousin had been talking me up and told Jasmine I was an aspiring writer. Jasmine handed her a card and I submitted some of my work to Storymix.

The piece I submitted was actually awful but Jasmine being Jasmine still gave me some really good advice and it definitely helped as I was already motivated to get better. Later down the line, Jasmine and I caught up again and she asked me to submit some more of my work. By this time I’d like to think I had gotten better and Jasmine started to let me know of some potential opportunities that might be coming up to write in the future. I was all in!

What drew you to the Future Hero project?

When I read the first outline, the first word I could think of was: cool. Jarell was someone I felt I could relate to as a young Black boy, and when I read his story, I framed my own experiences against his. I think when growing up, we all would like to believe ourselves to be part of something bigger than what we all know. Getting a chance to explore that and bring this world to life for Jarell was something I was really excited about.

Who is your favourite superhero?

Gotta be Batman. Black Panther is great of course, and I really love the X-men and the Invincible series. But Batman is just…Batman.

If you could choose a superpower, what would your superpower be?

I love to travel, so I like the idea of being able to teleport. Other than that I’d say being able to read and move things with my mind like Jean Grey.

Future Hero is a series written collaboratively with the authors named collectively as ‘Remi Blackwood’. How has your experience been writing as Remi Blackwood? What support or guidance did you find useful in the collaborative process?

Yeah, it’s been interesting. A great learning curve as I’ve only ever had to write in my own voice. Of course, each character has their own differences but at the core it is always me creating and shaping them. Writing as Remi meant I had to do my best to come out of myself and match a certain tone. At times it was difficult keeping my own tendencies at bay, but getting help from the Storymix team helped a lot. It’s been almost like an apprenticeship and I was involved in the creative process too, which was brilliant. I was able to suggest names, descriptions and add small changes where I thought the story might run more excitedly, and even personal experiences that are unique to the team — for example, Jarell’s time at the Barbershop and dealing with frenemies from his school. That part I really enjoyed.

Could you tell us a bit about your writing aspirations and your journey so far?

I’ve been writing since the beginning of 2019. I’d recently finished university and decided I wanted to do something that I enjoyed, and that was storytelling. I originally started writing Young Adult fiction (action/fantasy type novels), but later down the line realised that crime fiction was what really interested me.

My aspirations as a writer… I guess to get a chance to have my work showcased and read by people across the world. I’d love to get the chance and experience to venture into different areas like TV or film, but my first aspiration is to go to a bookshop and see something I’ve written, with my name on it, on one of the shelves. That’d be pretty cool.

What do you hope readers will gain from the Future Hero series?

A sense of wonder. The ability to imagine and grow belief in themselves. A lot of the times Jarell has to dig in against all odds – that is something we all could learn from.

You have a degree in History and Economics, which is very cool! How has this influenced your career in writing?

Yes, I do! It was what I was most interested in at the time — not so much anymore but hey, live and you learn! Since graduating, I have looked at it two ways. History is a very content-dense subject to study. Tons of books, reading, research, quoting. It made me more disciplined and versed with my writing. As for Economics, I guess it made me more savvy and open to making money, which as a creative is something you should never avoid. Perhaps me studying Economics has made me more willing to do a writing job, instead of just focusing on my own work.

But I’d say how my degree mostly influenced me is that it made me not want to go into an industry or field that I didn’t have a passion in. I have no interest in becoming an economist or being a History teacher, and so I focus on writing and that’s ok. It’s ok to change your mind and that’s been a valuable lesson.

Can you share any classroom tips for teachers when using the book?

We know Ulfrika is a wide and wonderful place, so it is relatively unexplored in the grand scheme of things. Perhaps you could imagine the vast wildlife and places Jarell has yet to meet/encounter!

Future Hero 3 is out next year, what can we expect from our favourite doodling hero?

Fearlessness. Jarell comes up against some dark and creepy creatures in the next exciting instalment of the series!

What can we expect to see from you next, and do you have any last words for our readers?

I really enjoy period crime dramas, so I’ve got a few exciting stories in the works and book 3 and 4 of Future Hero are being written as we speak.

You can follow @storymixstudio on Instagram and Twitter! Future Hero: Mission to Shadow Sea is out now. For more Future Hero action, visit futureheroseries.com and check out more amazing inclusive fiction series at storymix.co.uk. 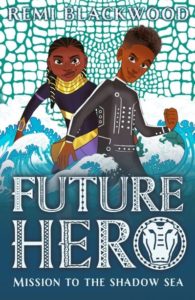 Future Hero: Mission to Shadow Sea is available to purchase online from Amazon or from Bookshop.org.