The Roman Quests: The Archers of Isca (2) 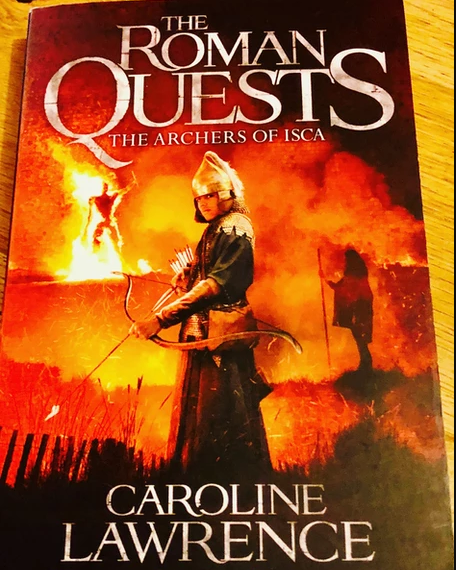 Book Title: The Roman Quests: The Archers of Isca (2) The Archers of Isca is the second of Caroline Lawrence’s four Roman Quests stories, which follow the adventures of a group of siblings who are forced to run away from Emperor Domitian in Rome and settle in Roman Britain.

In this instalment, the focus is on fourteen-year old Fronto, who embarks on his own adventure as he joins the Roman army. While army training is gruelling and relentless, Fronto is a character who thrives under structure and predictability so is well suited to the disciplined regularity of military life. Fronto is, however, all too aware of his lack of bravery at times and is determined to work hard on building the personal quality of courage in the face of difficult situations. When his sister Ursula is kidnapped by Druids, Fronto has the perfect opportunity to put his pursuit of courage to the test, knowing that deserting the army to go and find Ursula will risk lethal punishment if caught. What I love about The Roman Quests series is how the historical setting is evoked in such detail that you can’t help but feel totally immersed in the world of Roman Britain. Having studied this period of history and taught it at KS2, I was fairly familiar with a sense of what life was like in Britannia during this time, but this book has increased my subject knowledge vastly and brought the period to life in a new and most interesting way. There is also a great cross-over covered here between the Roman topic and the KS2 topic of Iron Age Britain, as in this story we visit Iron Age villages and explore tribal culture.

This is an intensely dramatic text and the vocabulary is ambitious, with plenty of Latin words introduced. The plot is exciting and the setting is steeped in historical details. I would recommend this book for upper KS2 and above. If you are looking for something suitable for slightly younger or less able readers, you could also try Caroline Lawrence’s popular series the Roman Mysteries.

Find The Archers of Isca on Amazon or from any good book shop or library.

Thank you to the author for kindly providing a review copy of this text.