The Rescue of Ravenwood

From the Costa Award winning author of Voyage of the Sparrowhawk comes an epic adventure with a call to arms: we must fight to save the most treasured things on our planet. On the top of the hill, overlooking the sea, that’s where you’ll find a magical place . . . To Bea and Raffy, […]

The Tale of Truthwater Lake

On one side of the underwater street is the remains of a house… It’s beautiful here, and eerie, a lost kingdom, a ghost village… It’s the near-future and Britain is having yet another heatwave. Of course, the government have put in the normal curfews for this kind of weather, and shops are forced to shut […]

Here is a story that everyone should know. It’s the tale of a princess named Shiloh. She lived in a kingdom, not far from yours, in a grand house with a swimming pool and fourteen floors. I know that sounds too big but here’s the thing: her mother and father were the Queen and King. […]

There is a box. Anything you imagine will appear inside. You have one go, one chance to create anything you want. What would you pick?” That’s exactly the question ten-year-old Timothy Hart gets to answer after discovering The Imagination Box. The greatest toy on earth. The top-secret contraption transforms his life but when the box’s […]

An epic tale of trees of power and a world under threat, from the author of the bestselling Five Realms series. Here come the roots of the Shadow Tree. Whatever they touch will never get free. Liska lives in Arborven, a city surrounding an extraordinary tree that gives all those living there special powers.

This viking duo will give Horrid Henry a run for his money! What if your parents WANTED you to behave badly? Set in the snowy fjords of a Viking kingdom, the terrible twins, Hack and Whack, are proud to be the best worst vikings. Nothing stops the marauding pair as they steal boats, loot a […]

The highly anticipated second novel from the author of acclaimed The Secret Starling – a spectacular adventure set through and under the streets of Paris. When Penelope Magnificent’s awful parents tell her they’re taking a trip to Paris, she surprises them by begging to go along. Nell is usually content to avoid her money-obsessed father […]

The dreadful strangers moved in on a wild and windy Thursday. ‘Fudgenuts,’ cursed Picklewitch, adjusting her cracked binoculars to get a better view of the comings-and-goings. ‘This won’t do at all. I bet they haven’t even bought me any cake.’ Picklewitch is, quite literally, out of her tree. She has a nose for naughtiness, a […]

Joyous and vibrant, this captures perfectly the excitement of getting ready for a celebration, as well as showcasing a dazzling array of intricate hairstyles. This is a glorious debut from an exciting new partnership who both emerged from the FAB Prize for undiscovered BAME writers and illustrators.

New and Collected Poems for Children

This stellar edition of her poems brings together work from her four award-winning collections for children, and sprinkles in a generous helping of new poems to match. From her dazzlingly debut Meeting Midnight through to her newest, brightest poems, Carol Ann Duffy’s writing for younger readers has always bubbled with wit and humour, intelligence and […]

My Mum’s Growing Down

SHORTLISTED for the Scholastic Lollies Awards – My Mum Is A Grown Down is a larger than life collection of poems for a middle grade audience about one wild, hysterical and hilarious Mum. She says ‘I’ve worked so hard for years and I deserve a rest!’ As she scribbles with crayons and pours custard down […]

The Complete Nonsense of Edward Lear

Edward Lear was the greatest nonsensicalist of all time. He was the inventor of the limerick and created the Jumblies and The Owl and the Pussycat. This complete edition of Lear’s nonsense verse – including the limericks, longer verses, alphabets and his own illustrations – is lovingly restored and beautifully presented, for adults and children […]

The perfect gift for children aged 8+, this stunning classic collection of poetry will delight a new generation of readers of the Faber Children’s Classics list. Peacock Pie contains the finest of Walter de la Mare’s poems for children, accompanied by exquisite original illustrations from Edward Ardizzone. This beautiful new edition of a classic anthology […]

The Children of Castle Rock

St Trinians and Lauren St John collide in this hilarious and thrilling bestselling adventure from Natasha Farrant! When Alice Mistlethwaite is shipped off to boarding school in Scotland it’s nothing like she imagines. Run by the mysterious Major, there are no punishments and the students are more likely to be taught about body painting or […]

The Week at World’s End

1962 – London during the Cuban Missile Crisis. What would you do if there was a real possibility that the world might end? Ray, aware of his parents’ building worry, decides to take matters into his own hands. He builds a shelter in the woods behind his house in the hope that he never has […]

Podkin is the son of a warrior chieftain. He knows that one day it will be up to him to lead his warren and guard it in times of danger. But for now, he’s quite happy to laze around annoying his older sister Paz, and playing with his baby brother Pook. Then Podkin’s home is […]

Are you sick of being utterly adorable? Tired of being cuddled and hugged? Fed up of having your head confused for your bottom because you just so happen to be SOOOOPER-DOOOOOPER fluffy? Lin: If you answered yes to any of those questions, then you’re in the right book. Everyone thinks that Lin is the cutest […]

Glastonbury with veg! From the bestselling picture book team behind Kitchen Disco. The vegetables start waking up They stretch and rise and shine – They set up lots of stages, Cos it’s VEGGIE PARTY time! Mud, rain, vegetables. A winning combination!

From the funniest voice in young fiction today, the first in an irresistible series for young readers about imaginary friends in hilarious rhyming text and with adorable illustrations by Ella Okstad. ‘Can you see him? My kitten? Close your eyes tight His fur is so soft and all silvery white Imagine him quick! Have you […]

At night when you are sleeping There’s a party in your house, It’s a pumping, jumping, funky bash When all the lights go out . . . When the sun goes down, the Kitchen Disco starts up – and all the fruit in the fruit bowl come out to play. There are lemons who break-dance, […]

As the day draws to a close, a family prepares for Christmas – decorating the tree, hanging stockings by the fire, putting out a plate of mince pies… Outside, the world turns to white. ‘No breath of wind, No gleam of sun Still the white snow Whirls softly down’

The Story of the World Cup

Brian Glanville’s dramatic history of the world’s most famous football tournament has become the most authoritative guide to the World Cup. His classic, bestselling account is a vivid celebration of the great players and legendary matches in the competition from Uruguay in 1930 to Brazil in 2014 – as well as a bold attack on […]

Stunning illustrations by Chris Mould make this one of the most exciting editions of The Iron Man to be published. The Iron Man came to the top of the cliff. Where had he come from? Nobody knows. How was he made? Nobody knows. Mankind must put a stop to the dreadful destruction by the Iron […]

When Atticus receives a mysterious message asking him to a meeting in a sleepy coastal town, he packs his bags and sets off. The world’s greatest cat burglar likes a good mystery and this time curiosity has got the better of him. The writer of the message, it turns out, is none other than Jimmy […]

All at once, it was as if the stars leapt closer. Grandma grabbed the boy, raising him high above the rooftiles on her head. She was alive! The boy’s grandma was a famous architect. Her garden is still full of old building materials. Unwilling to accept she has gone, the boy builds a giant structure […]

What Happened to You?

The first ever picture book addressing how a disabled child might want to be spoken to. What happened to you? Was it a shark? A burglar? A lion? Did it fall off? Every time Joe goes out the questions are the same . . . what happened to his leg? But is this even a […]

When Stars Are Scattered

A heart-wrenching true story about life in a Kenyan refugee camp that will restore your faith in real-life happy endings. Omar and his brother Hassan, two Somali boys, have spent a long time in the Dadaab refugee camp. Separated from their mother, they are looked after by a friendly stranger. Life in the camp isn’t […]

Max and The Millions

From Costa-shortlisted superstar, a highly anticipated standalone adventure about what happens when you find a tiny, living, breathing civilization on the floor of your school dorm room. Max is used to spending time alone – it’s difficult to make friends in a big, chaotic school when you’re deaf. He prefers to give his attention to […] 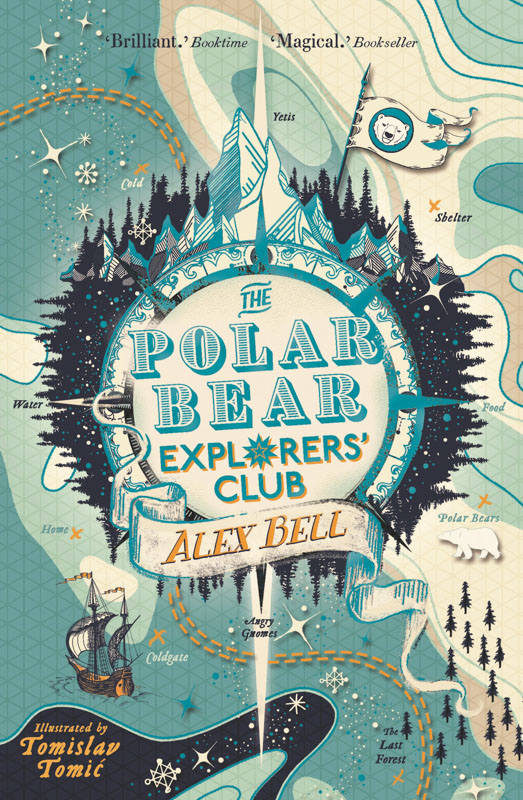 It sounded like a respectable and worthy enough death for an explorer – tumbling from an ice bridge to be impaled upon a mammoth tusk – but Stella really, really didn’t want that to happen, just the same. Join Stella Starflake Pearl and her three fellow explorers as they trek across the snowy Icelands and […] 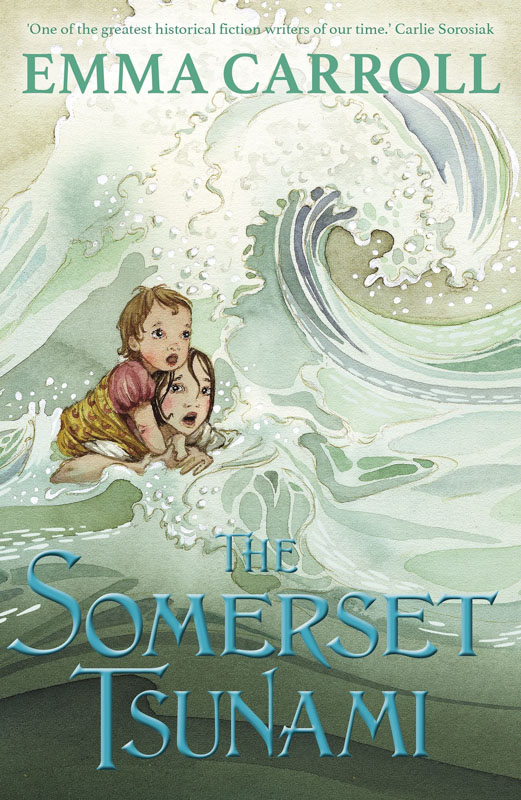 A sinking boat. A girl in disguise. A disappearing sea. When Fortune Sharpe carves a boat from a tree with her beloved brother, Gem, she’s only having a bit of fun. But now is not the time for a girl to be drawing attention to herself. She is sent away to find work dressed as […]

Squishy McFluff: Tea with the Queen 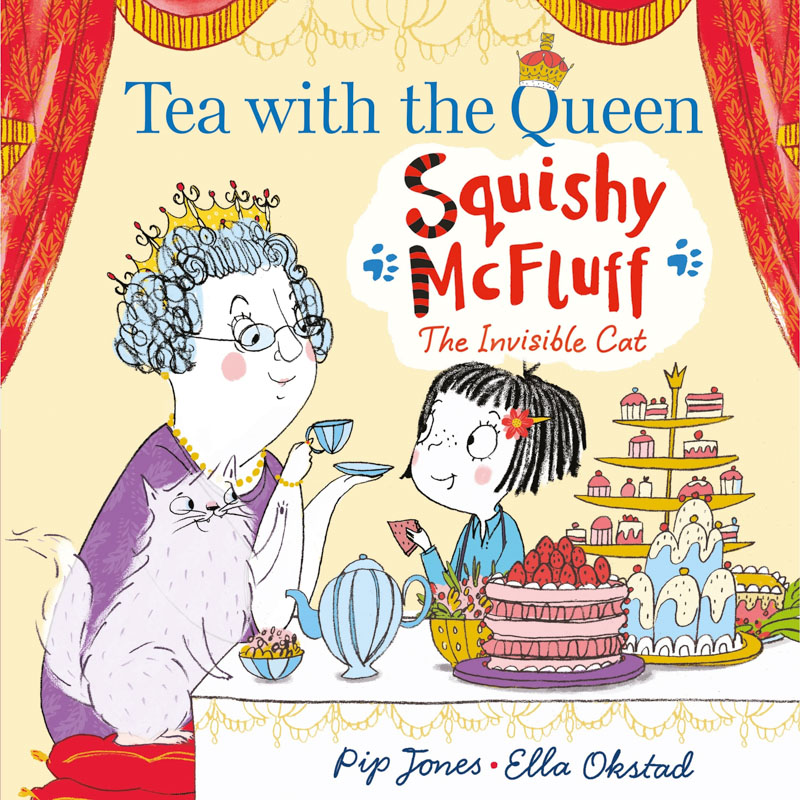 From the funniest voice in young fiction today, our first ever Squishy picture book sees Ava and her invisible cat go to Buckingham Palace to visit the Queen. A day out with Squishy could never be boring! When Squishy and Ava go on a trip to London, they can’t resist the chance to explore the […]

Letters from the Lighthouse 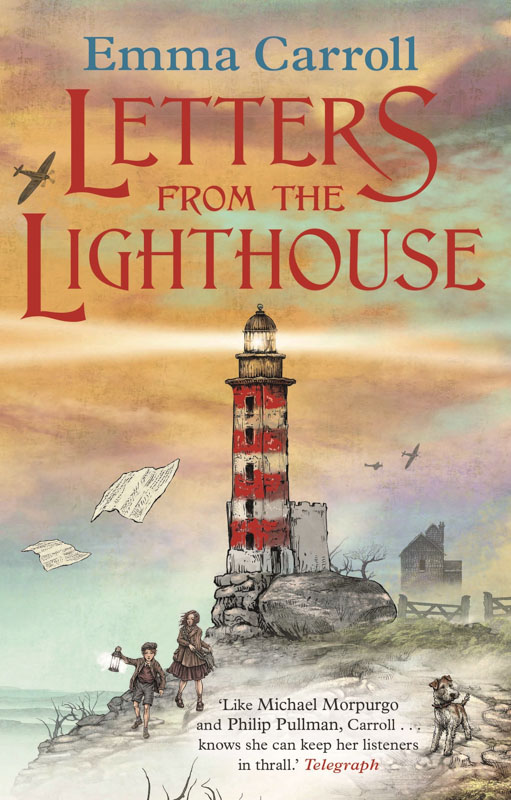 We weren’t supposed to be going to the pictures that night. We weren’t even meant to be outside, not in a blackout, and definitely not when German bombs had been falling on London all month like pennies from a jar. February, 1941. After months of bombing raids in London, twelve-year-old Olive Bradshaw and her little […]

Secrets of a Sun King 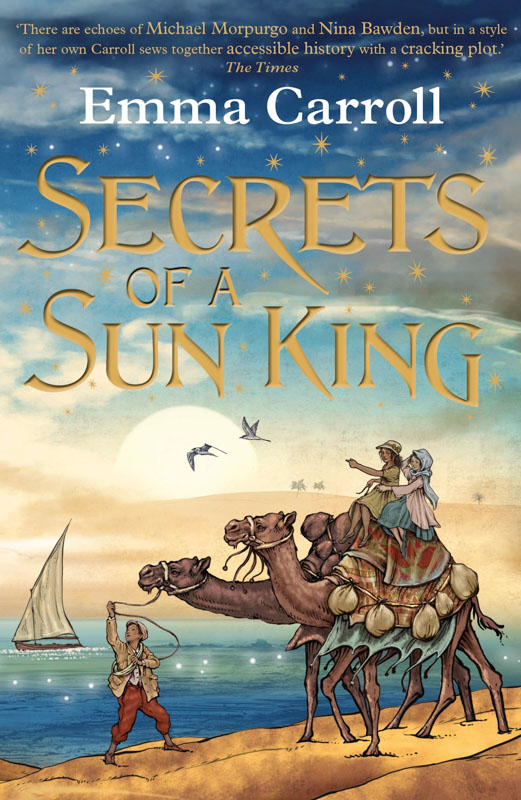 London, 1922. A discovery from ancient Egypt . . . A cursed package . . . The untold story of a young pharaoh . . . When Lilian Kaye finds a parcel on her grandad’s doorstep, she is shocked to see who sent it: a famous Egyptologist, found dead that very morning, according to every […]