Budding artists across the globe have been inspired and entertained by illustrator Rob Biddulph this year through his popular 'Draw With Rob' initiative.

Rob’s series of twice-weekly draw-along videos were designed to help parents with children home from school due to the coronavirus pandemic and they quickly became a viral hit. The videos - featuring many of Rob’s own picture book characters - captured the imaginations of families, children and artists young and old and have amassed approximately 28 million impressions on YouTube alone. Impressively, on May 21st Rob broke the Guinness World Record for the world’s largest art lesson when over 45,000 families took part in his 30 minute class to draw a whale.

To continue inspiring young artists, Rob has created a new 64-page, full-colour 'Draw with Rob' activity book, so that fans can use the interactive guides to draw their favourite characters and create their own gallery. You can order Draw With Rob online or from your local bookshop. We're thrilled to have the opportunity to interview Rob all about the new book, the record-breaking attempt and his work as a children's illustrator.

with Rob Biddulph, author of Draw With Rob 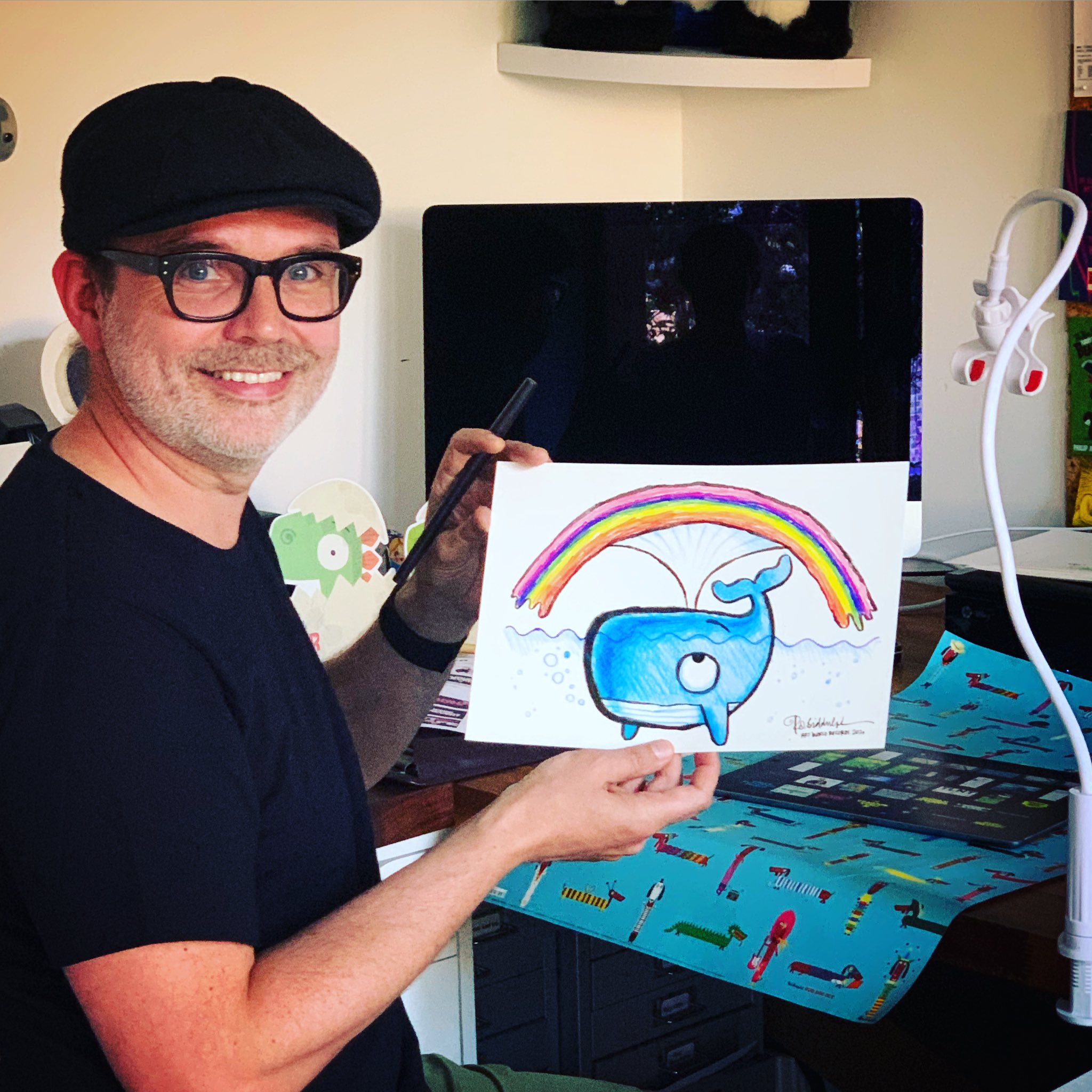 Can you tell us about how the 'Draw With Rob' initiative came about?

I was sitting at home on a Sunday evening in mid-March watching the news, and I suddenly realised that with the impending school closures lots of parents would be stuck at home with their kids looking for things to do. It occurred to me that I might be able to help. I’ve been doing step-by-step draw-alongs at my live festival and school events for years, and it struck me that if I was to film some of them in my studio and post them online a couple of times a week, it might give children (and their grown-ups) something to look forward to. So I made a little teaser right there and then, and put it up on social media to see what people thought of the idea. The reaction was immediate. People went crazy for it! And that was the start of DrawWithRob. What can young artists expect from your new Draw with Rob book (available here)?

Well, I must start by saying that I'm very proud of it. It is jam-packed with arty things to do - draw-alongs, puzzles, colouring, art challenges, pictures of my dog Ringo... Put it this way: if you like my videos, you'll LOVE this book. I promise.

We loved joining in with the successful Guinness World Record attempt for the world’s largest art lesson. How nervous were you about the attempt succeeding?

Pretty nervous. We didn't ever really know for sure how many people would turn up on the day. A lot of people said that they would be there, but you never know. I remember sitting there in my studio, totally on my own, watching the clock countdown to the start time, and I could see how many people were in the virtual waiting room waiting for the lesson to begin. With about ten minutes to go there were only about a thousand people in there, and we needed sixteen thousand to break the record, so I was VERY nervous at that point. But as we got closer, the numbers suddenly started to go up at an astonishing rate. With a couple of minutes to go it was at forty thousand and so at that point I relaxed a bit. Well, until I started to picture a football stadium full of people all waiting to listen to me tell them how to draw a whale at least. The nerves re-appeared at that point. Once I got going it was fine though. Really fun, actually.

Where do you find the inspiration for your own picture books?

In all sorts of places. The supermarket, driving in the car, walking the dog. Inspiration can strike at any time. I just have to remember to make a note of the idea on my phone immediately, otherwise I instantly forget it and it's lost forever.

The new book encourages children that 'everyone can draw'. What do you say to children who think that they can’t draw very well?

I tell them that everybody can draw, it's just that some people need a bit more help with the order to do the drawing in. And that's where I come in. If you break a drawing down into bite-sized pieces it immediately becomes more attainable and less intimidating. When I'm doing my live events, I always ask children who think they can't draw to put their hands up. I then make a point of going over to those kids at the end of the session and looking at their pictures. They are always really good and the kids are so proud. It's a nice feeling to have brought that feeling out of them.

Teachers sometimes feel under pressure to teach art in formal ways, but what would you say is the role of drawing for pleasure in the classroom, and how can schools tap more into its power to foster an enjoyment of enjoying of stories?

Drawing for pleasure is essential. I don't think children should ever be told that they're not very good at it. Art is not a binary thing - it's not maths -and there are no right and wrong answers. It is totally subjective. If kids are told they can't do it they won't express themselves freely and they won't enjoy the experience. It happens all the time. Children draw with enthusiasm and abandon until they are seven or eight, and then something will happen - maybe they are told that they're doing it wrong, or they might start to compare themselves to other children in the class who they think of as 'better' - and so they stop. Often they stop forever. It's such a shame because they are missing out on so much pure enjoyment and losing art as a creative outlet. As soon as we impose rules on drawing, it becomes 'work' and that's when kids can feel like they are failing. That's why I always encourage them to keep on drawing even if they make a mistake, because it's often these mistakes that give a drawing its character. The imperfections are often my favourite elements of an artwork. Nobody wants to see anything too perfect. If that was the case we could just design a computer to do it and be done with the whole thing.

Equally, reading for pleasure is the key to getting the most out of life. It sounds like a grandiose statement, but I'm convinced that it's true. The more you read, the more curious you become and the more you learn. You're much more likely to have a fulfilling life and reach your potential that way.

Finally, we’d love to know what your own favourite children’s books are?

My favourite children's book of all time is How The Grinch Stole Christmas by Dr Seuss. The rhyme is perfect, it's really funny and clever, the artwork is beautiful and the message is great. Perfection. I also love everything by Richard Scarry, in particular What Do People Do All Day? Other favourite authors and illustrators include Lauren Child, Peter Brown, Oliver Jeffers, Judith Kerr, Julia Donaldson, Axel Scheffler, Jolly Roger Bradfield, Ed Vere and Emily Gravett.

You can order Draw With Rob online or from your local bookshop.

Many thanks to Rob Biddulph for answering our questions and to the publisher for sending us a review copy of this book.